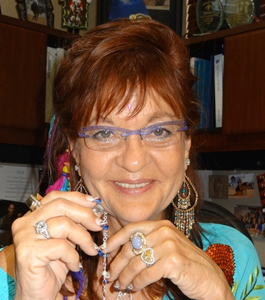 Sami Fine Jewelry is a completely unique store with an equally unique history.  Sami Jack, the founder of Sami’s, started her career selling jewelry in her bikini on the beaches of Daytona Beach, Florida.  At the time she was mostly selling Indian jewelry, and there was a major demand for it all over the United States. She soon built her popularity, carrying turquoise into a unique traveling business, which included selling to airports all over the southwest. This is where she fell in love with our beautiful desert and decided to set roots in Scottsdale, Arizona.  In 1980, she had a beautiful daughter named Stephenie. Having a child made it hard to travel. This is when she decided to open a retail jewelry store in old town Scottsdale.  Years later, Sami fell in love with Fountain Hills. Sami has been in Fountain Hills since 1987, where her first store was only 600 square feet and was located inside the town bank building. In 2001 Sami saw the opportunity to break ground on her dream store. In 2002 this dream became a reality, Sami Fine Jewelry opened its doors on the Avenue of the Fountains. Boasting a new look, and 3600 square feet to boot!  Sami and her daughter Stephanie have turned Sami Fine jewelry into a one of a kind “fun” store with its own active place in the Fountain Hills community.  In 2008 Sami Fine Jewelry was even named one of America’s "Top 5 Cool Jewelry Stores" (Instore Magazine). Sami retired in 2012 and Stephenie has continued on with the Sami Fine Jewelry brand and dream.