Arizona is hot!  But not just because of the weather. Phoenix is considered one of the “hottest” shopping destinations in the Southwest! If you travel to the Valley of the Sun, Arizona jewelry is a must-have take home souvenir!  Did you know that Arizona is home to some of the prettiest gemstones in the world? You can’t say you were in Arizona if you don’t bring home a piece of jewelry crafted right here in the Grand Canyon state. With that being said, you might be curious about some of Arizona’s native gemstones, and where to buy these treasures. Here are two of the best locations to shop for jewelry. 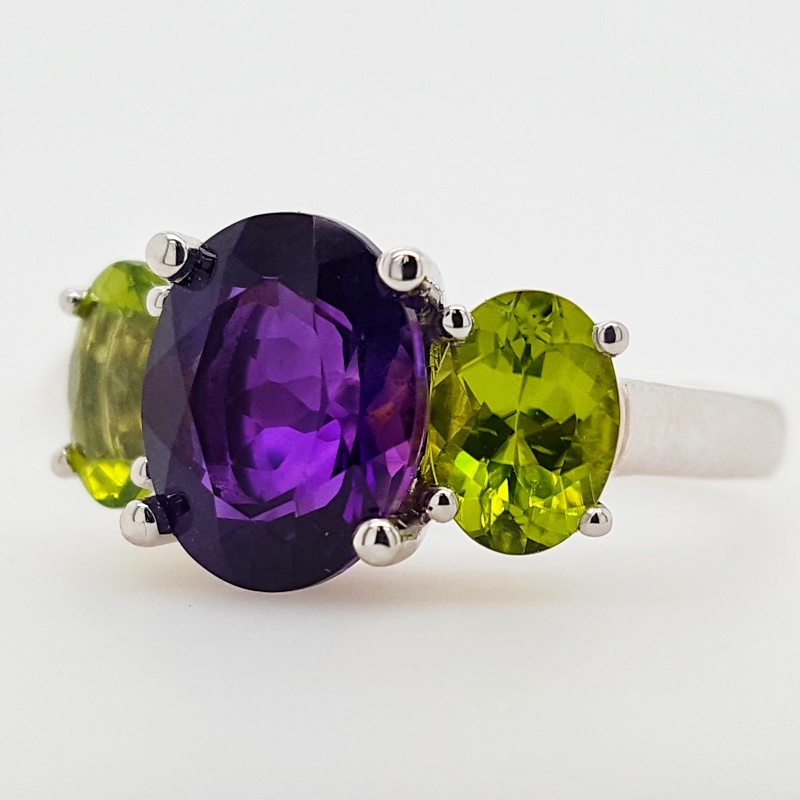 Arizona is known for Turquoise and native American jewelry, but did you know that there are many other desert gemstones? Sami Fine Jewelry, of Fountain Hills (about 20-30 minutes from anywhere in the valley) offers the only American Gem Collection in the world.  Since Sami Fine Jewelry was founded to showcase Arizona and American gems. They have dedicated 15 cases of Arizona-only gemstone jewelry, along with 3 additional cases of American mined gemstones. The most popular Arizona gems include purple Amethyst from the Four Peaks Mountains, green peridot from Globe, red garnet from the Four Corners, and Kingman turquoise jewelry. Sami’s sets all of their Arizona mined gemstones in custom made, fine gold and silver jewelry. From pendants, rings, earrings, and bracelets they are sure to have your Arizona treasure. 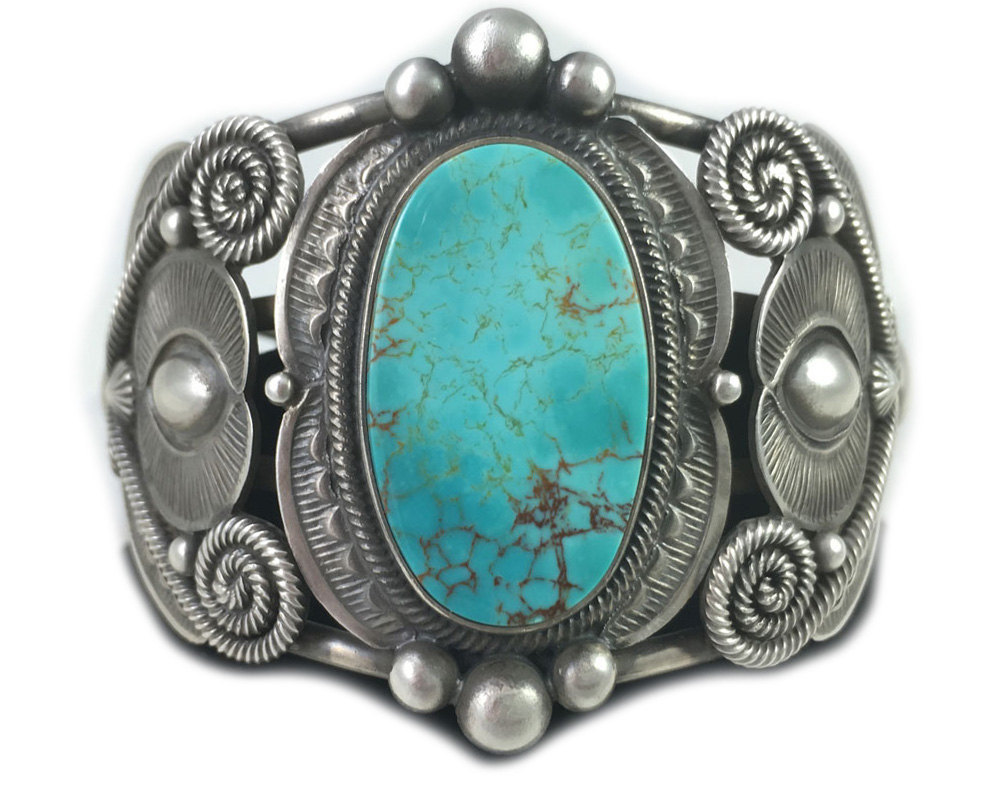 If you’re only in the market for Native American jewelry, then there are lots of great places to shop. Old Town, Scottsdale has hundreds of jewelry stores. Wandering up and down the streets of old Town can make for a fun day of window-shopping, but there is one shop that stands out among the rest for quality and craftsmanship. Gilbert Ortega is a huge Native American jewelry store in the heart of Old Town, and offers the finest quality handmade Native American cultural art and jewelry.  Featuring a large number of Native designers, they provide many one of a kind turquoise pieces, along with affordable replicated pieces. We highly recommend them, if Turquoise is on your list.

Want to know more about Arizona gemstones themselves? Here are some important things to know when buying and caring for natural gemstone jewelry.

Turquoise is among the most well-known gems that are found in the Southwest. It is an opaque, blue-green mineral that has been prized for its beauty for thousands of years. Turquoise is one of the birthstones for the month of December, and is the celebratory gem for 11th wedding anniversaries. You might be wondering why turquoise often appears to have dark “veins” running through it. These veins are actually known as the “matrix,” and are remnants of the stone that the turquoise formed in. Turquoise without these dark “veins” is incredibly rare, and highly valuable. Turquoise has a Mohs hardness rating of 5-6. It is a fairly delicate gem, and should be handled carefully. Consider storing your turquoise jewelry away from other gems to avoid scratching. Turquoise can be cleaned with a damp cloth to gently remove debris from the stone, and can be dried with a clean cloth. Turquoise can be damaged by excessive chemicals. 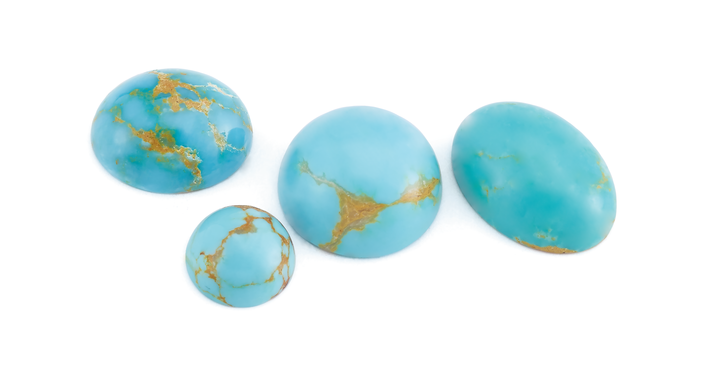 Amethyst is another gem that is local to Arizona, as well as other regions of the world. Arizona Amethyst is unique for a number of reasons - one being the trademark magenta tones within the gem. The soil in the Mazatzal Mountains, also known as the “Four Peaks,” is rich with iron manganese. This mineral gives amethyst red tones in addition to violet, increasing their value and making them popular collector’s gems. Arizona is also home to the only commercially-run amethyst mine in America! Sami Fine Jewelry has spent decades collecting the largest array of high-quality Four Peaks Amethyst. This gem is the birthstone for February, and is the gift given for 33 year anniversaries. Amethyst ranks a 7 on the Mohs scale of hardness, meaning it is much more durable than turquoise, but can still be chipped or cracked if it gets knocked against something sturdy. Amethyst jewelry can be cleaned at home with a hot soak in soapy water, and can be scrubbed gently with a soft-bristle brush. 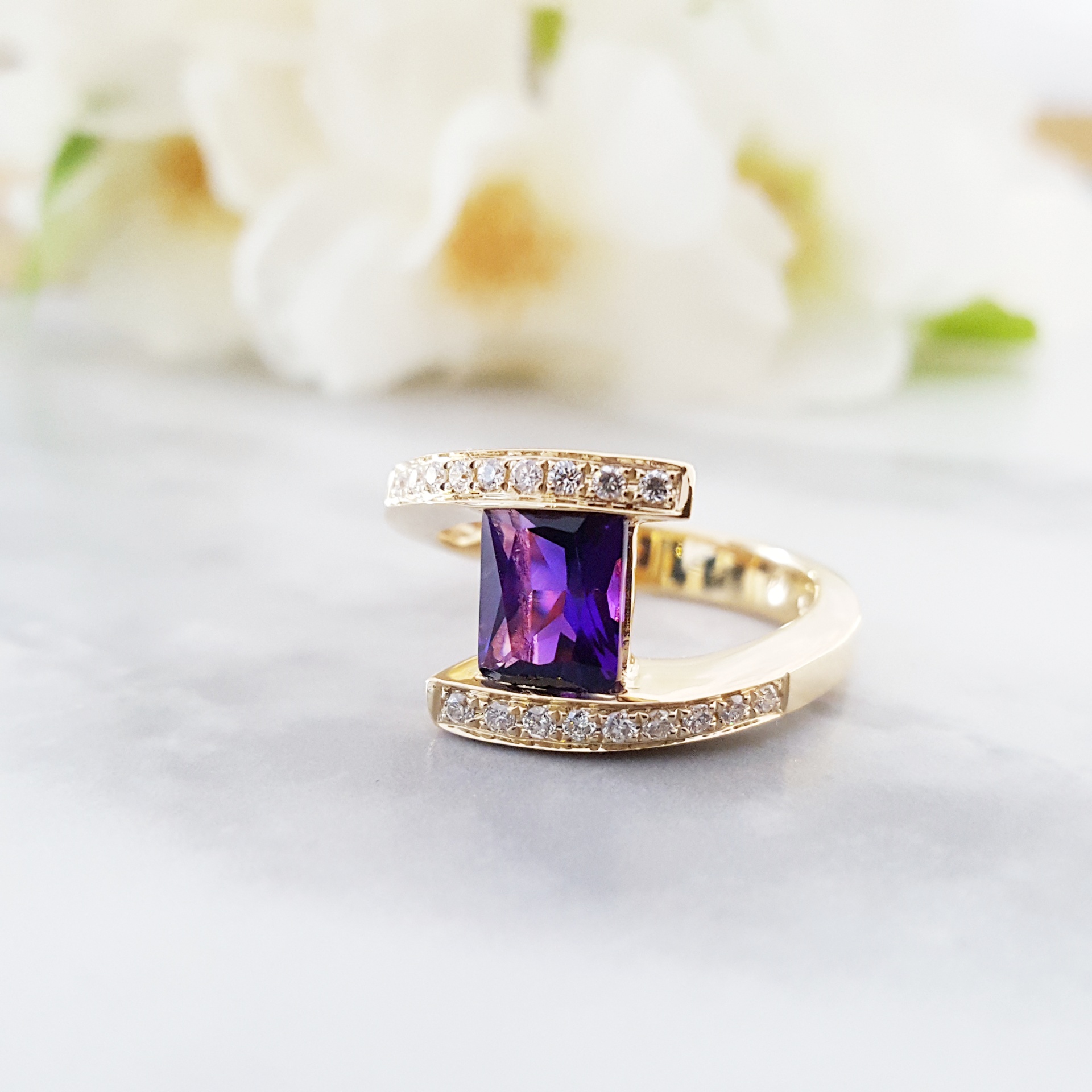 Peridot is a vibrant green gem that, for the past century, has largely been mined out of Arizona! The Peridot deposit is on the San Carlos Apache Reservation, which is just outside of Globe, AZ is a major source of peridot. Most of the peridot found here is small, and used for bead-work. However, larger gems can be found that are able to be cut, polished, and set into jewelry. Finding Arizona peridot gems over 5 carats is extremely rare. Sami’s is proud to feature a full case of Arizona Peridot in custom designs with a variety of different-sized stones. Peridot is the birthstone for August, and is given on 1st or 16th anniversaries. Peridot ranks a 6.5-7 in hardness, so it is fairly durable, just like amethyst. It can also be cleaned with almost any at-home cleaner, or with a hot bath of soapy water. 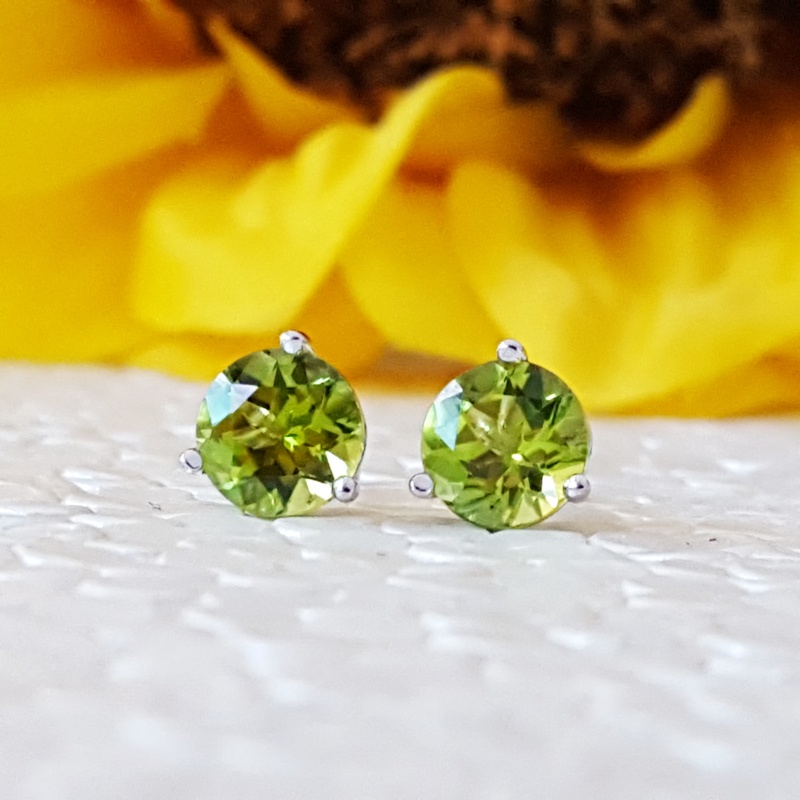 Arizona “Anthill” Garnet didn’t get its nickname for no reason. That’s right, ants are the ones doing the heavy lifting in this operation! As ants dig their tunnels, they push debris that get in their way to the surface of their hills. In the Four Corners region of Arizona, they often run into rough garnet! As rains wash the rough gems and make the red gleam visible, these garnets can be collected by hand. These garnet gems have a very high saturation of color, and have even been called the Arizona Ruby. Arizona Anthill Garnets over 1 carat are extremely rare, and can be worth several times more than similar garnets from other regions. Garnet is the birthstone for January, and is given as a gift for 2nd anniversaries. Anthill Garnet is about a 7 on the Mohs scale as well, so it is durable in a variety of styles. Warm, soapy water can be used to clean garnet jewelry. These gems are usually also safe to be cleaned in an ultrasonic cleaner by a jeweler. 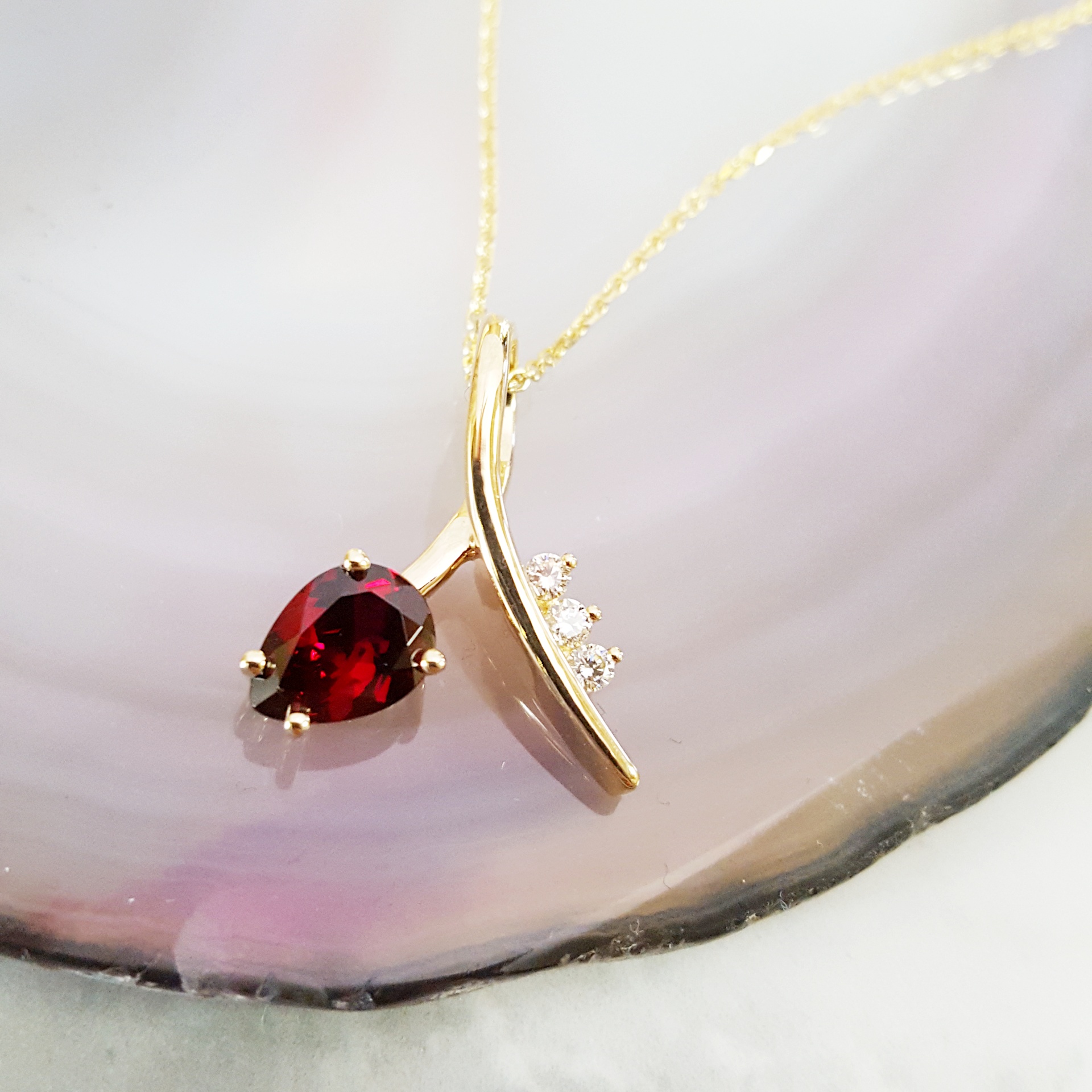 Now that you know more about the gems that Arizona has to offer, think about taking home a piece of the desert landscape with an Arizona-mined piece of jewelry!