Sami Fine Jewelry rocked out with famous electric bassist Nik West! She was born and raised in Phoenix, Arizona along with her sisters. Her father taught both her and her sister about music and singing. When West was in high school, she discovered the bass while listening to songs by Michael Jackson. Her gift for music and singing lead her to be noticed by a number of famous artists. She released her first album “Just In The Nik of Time,” which caught the attention of Dave Stewart from the successful duo Eurythmics. Since, she has shared stages with John Mayer, Sugarland, Macy Gray, Bootsy Collins, George Clinton/Parliament Funkadelic, and Orianthi. She was also a bassist for Prince in his later years. In June 2016 Nik joined Taylor Swift, Bruno Mars, and Slash as a cover girl for American Musical Magazine. She has appeared on the covers of virtually every bass magazine and has been featured in numerous publications for People Magazine, Vanity Fair, Teen Vogue, Rollingstone, Ok! Magazine, Billboard, Afropunk and more.

Nik is not only awesome because of her great personality and impressive musical talent, but she is also the queen of all things purple! This includes her hair, which is styled to look like a purple bass clef. Naturally, this love for purple makes here right at home at Sami Fine Jewelry! She is now a solo artist and in addition to playing her bass, she sings. She has released a number of albums over the years and has even won some awards for her work. Most recently she released her album “Purple Unicorn,” which won the 2018 Independent Music Award. We are so honored to have her wearing our very own Arizona Four Peaks Amethyst to the 2019 Grammy Awards! 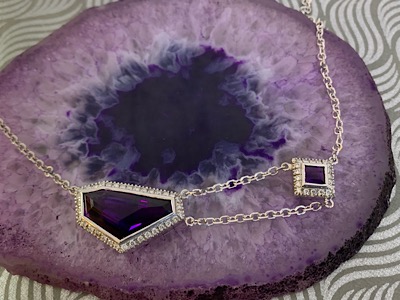 When one of Sami's designers, Lilly Kariotoglou heard that Nik West was coming to Sami's, she had the perfect idea in mind for a custom pendant. Lilly came up with a unique interpretation of a bass guitar, as unexpected and gorgeous as the star who would wear it! Showcasing a special "rockstar" cut 9.91ct Arizona Four Peaks Amethyst, this desert gem is surrounded by a diamond halo. This element of the necklace is the “body” of the guitar. Lengths of chain representing the strings connect the “body” to the “head” of this guitar - another Arizona Amethyst surrounded by diamonds. The funky design is one of a kind with specialty cut gemstones that can never be recreated!

If you know about Nik West, then you know that she recently got engaged to Niko. Coming into the store for the first time, Nik and her finance were greeted by our Frenchie greeters, Gemma and Jewel. Niko especially loved hanging with our mascots. We love Niko and were very happy to meet him as well. Their love for each other is so amazing! He is an amazing and cool guy, and we are betting that they grow old together. They learned about all kinds of gems and jewelry, from our iconic Arizona Four Peaks Amethyst, to our Arizona Peridot and Anthill Garnet, American Gem Collection, and our diamond selection, discovering some special and unique pieces along the way. When Lilly got hold of them, Nik viewed the sketch of the pendant and heard about Lilly’s vision, and quickly fell in love with it. She grew more excited by the second, and could not wait to see the pendant completed. She mentioned that she would love to wear her new piece to the Grammy Awards... in just eight days! Our team was determined to make her wish come true and have the necklace finished and Grammy-ready in just one week. 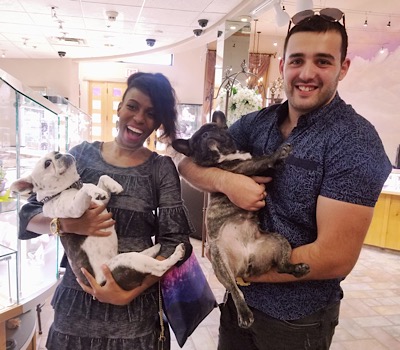 We accomplished our goal, and the very next week Nik came in to pick up her pendant. She was stunned at how spectacular it looked and was thrilled that she would be able to show it off on the red carpet! Not one to under-accessorize, Nik also took some other Amethyst bling to debut at the Grammys. She borrowed a gorgeous (15.19 carats of Amethyst and 2.3 carats of diamonds) Arizona Amethyst and diamond bracelet, an amethyst and diamond ring, and amethyst and diamond earrings to accent her pendant and make her sparkle at the Grammys. Niko was even excited about the amethyst and borrowed a yellow gold and Arizona Amethyst men’s ring so he could have a pop of purple, too. Needless to say, both Nik and Niko looked absolutely fabulous walking down the Grammy red carpet. Nik’s metallic one sleeve gown perfectly highlighted her vibrant purple jewelry. She strutted down that carpet feeling and looking like the rockstar she truly is. 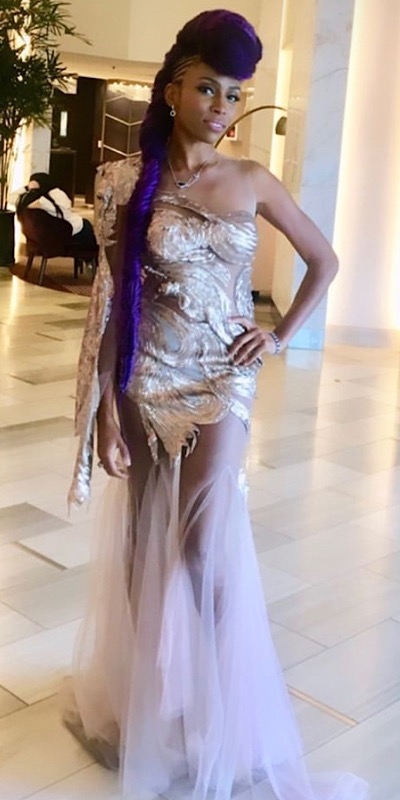 We were elated to have the opportunity to work with Nik, our local Arizona celebrity. From the moment she set foot into the store her personality and smile were infectious. The Sami Fine Jewelry team had a great time with her and her fiancé! We look forward seeing Nik in Sami’s again and making sure she always has some purple bling from her home state!