Some have said that tourmalines represent the full color spectrum of the rainbow - and, essentially, they’re right! This versatile gem can be found in a full spectrum of hues. In California, this remarkable gem can be found throughout the state, but most mines are concentrated within San Diego County. This gem has been used in jewelry and relics for ages, and it’s beauty is still timeless and enduring. It’s no wonder that the California Tourmaline is one of our most popular American Gems!

Tourmaline is a fairly common kind of silicate mineral that can be found all over the world. This makes it one of the most popular gems. However, just because they can be found in a variety of places doesn’t mean that it’s easy to find high quality gems! Because tourmaline is formed in pockets or fractures within rock as steam brings up minerals, they often have inclusions. These inclusions - small “freckles” or streaks within the gem - are generally less than ideal for jewelry. A large tourmaline with minimal inclusions can sometimes cost thousands of dollars. However, some people like unique inclusions and consider them to be beautiful evidence of the changes the gem has endured.

With a Mohs hardness of 7 to 7.5, these gems are durable enough to be worn in most jewelry. However, these gemstones aren’t invincible! A knock against a hard surface could potentially crack or chip the stone. This is why we prefer to use smaller tourmaline gems in rings, and save larger stones for pendants, where they are less likely to encounter damage. 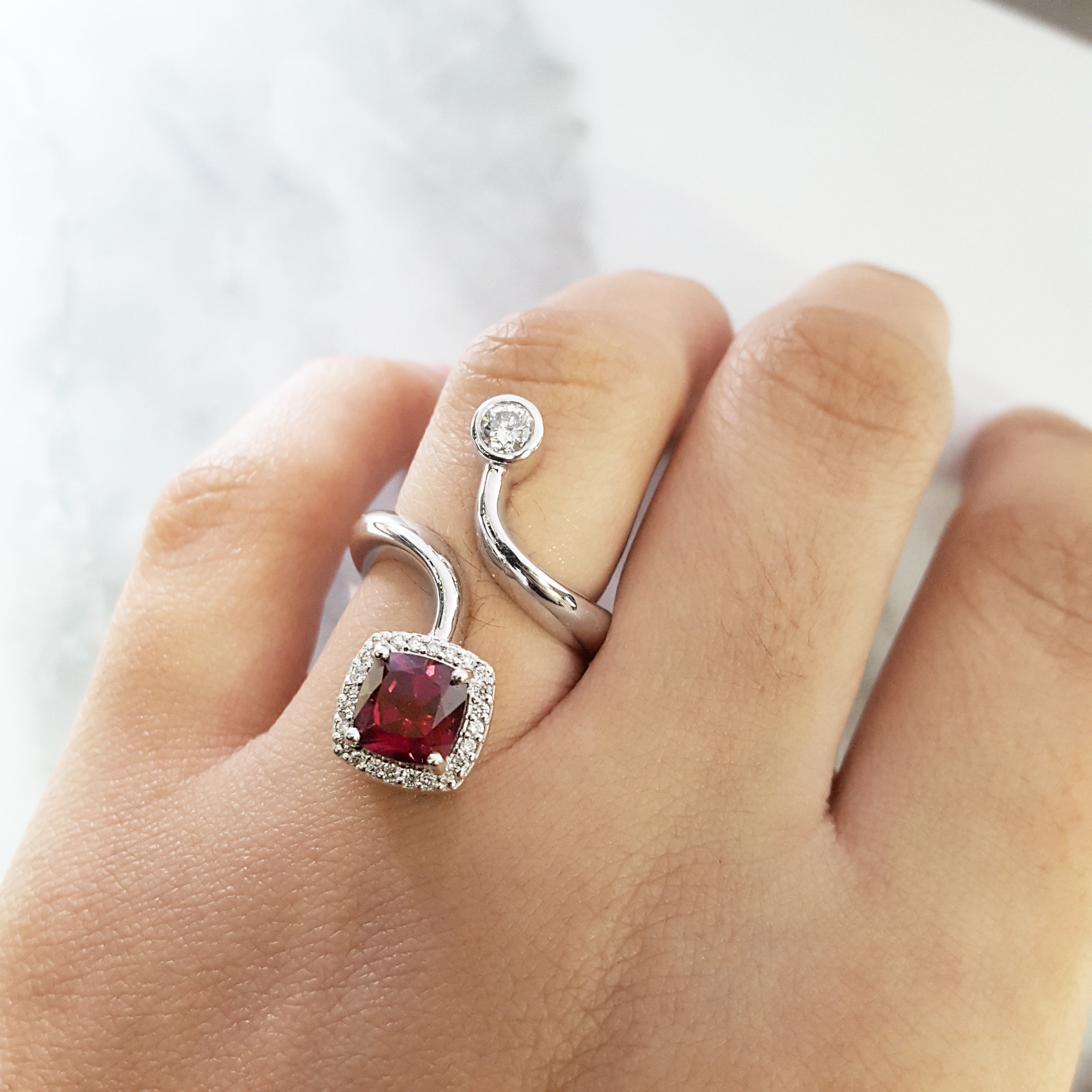 In the United States, the most important source of tourmaline is in Southern California. Though tourmaline has also been discovered and mined in Maine, California has been the center of commercial mining here since the gem’s popularization in the 1800’s. Initially, the saturated red and pink colors of California tourmaline attracted international attention, and it was shipped to China for use in carvings, jewelry, and other adornments. However, as times changed and Asain interests in the gem dwindled, so too did mining.

Today, thanks to revitalized interest in supporting local and more conscientious mining, California Tourmaline is seeing a resurgence. Mines outside of San Diego are open and running. Some are commercial, some are smaller sites that welcome the public to dig for their own gems. Most are family-owned, and all are invested in keeping the spirit of American mining alive. 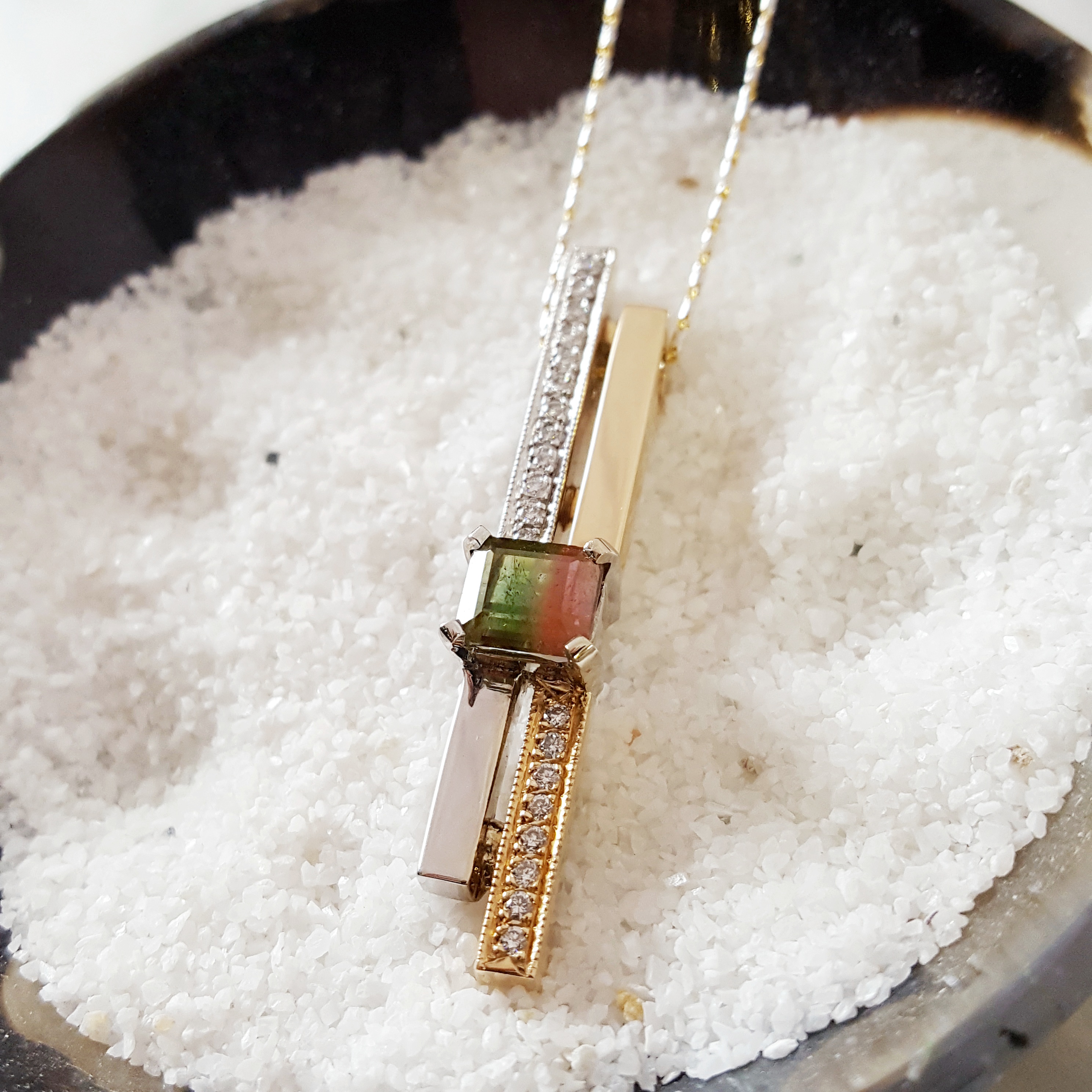 The Colors of the Rainbow

The most interesting thing about tourmaline is perhaps it’s ability to look like other gems. A famous story tells of a Spaniard in the 1500’s who picked up a piece of green tourmaline along a riverbed and declared that the land was rich with emeralds! Tourmaline can be a master of disguise. Today, with the help of chemical testing, we now know that tourmalines are in fact all part of the same gem family, even though they come in a multitude of colors.

Black tourmaline is actually the most commonly occurring  color, though it is generally not seen in fine jewelry. This color is more frequently made into beads or used in carvings. More popular colors include pinks, greens, yellows, purples, and peaches. Tourmaline gems can even have more than one color within the same crystal! The most popular color combination is pink and green, earning it the nickname “watermelon” tourmaline. Sometimes, though it is rare, three or more colors can be seen within a single gem. The most sought-after color of all though, is a rare vibrant blue. 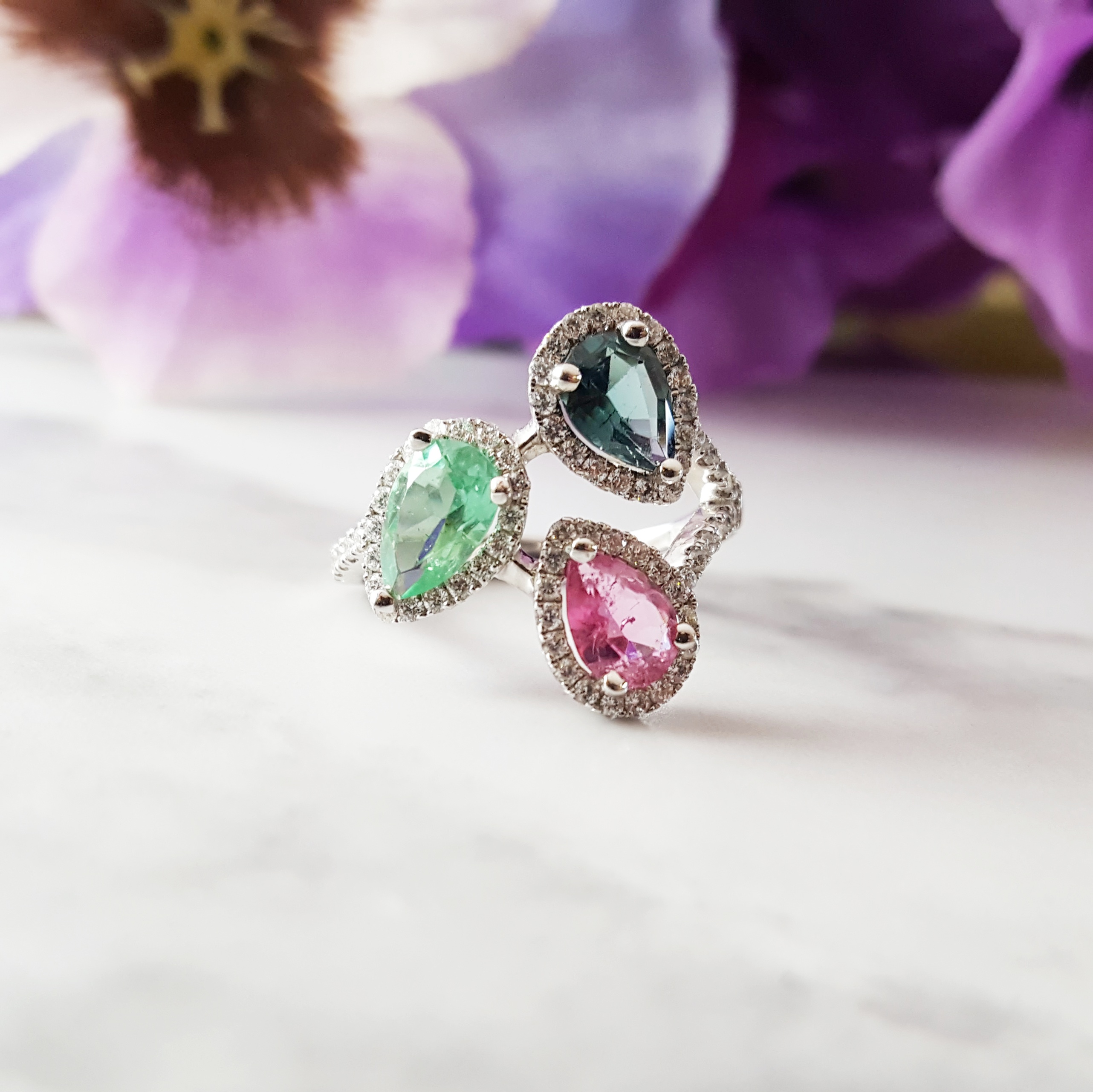 With a variety of colors and a rich history, California Tourmalines are excellent gems to add to your collection. We hand select every tourmaline we use, and create lasting relationships with miners and gemstone cutters in California to ensure we buy only the best. Whether you’ve fallen in love with a one of a kind piece from our American Gem Collection, or want us to source and set a gem for a custom design, we are committed to finding the highest quality, ethically mined gems you’ll be excited to show off!