As January comes to a close, we wanted to do a spotlight feature for this month’s birthstone: garnet. Most of you know about Arizona Anthill Garnet (if you don’t - check out this blog). This deep red gemstone has been nicknamed the “Arizona Ruby.” We can’t help but want to brag on gemstones that are mined locally! But, did you know that garnet can be found throughout the U.S., and all around the world? We’re spotlighting some of our favorite garnet jewelry that features not only Arizona garnet, but garnet from all over the world! 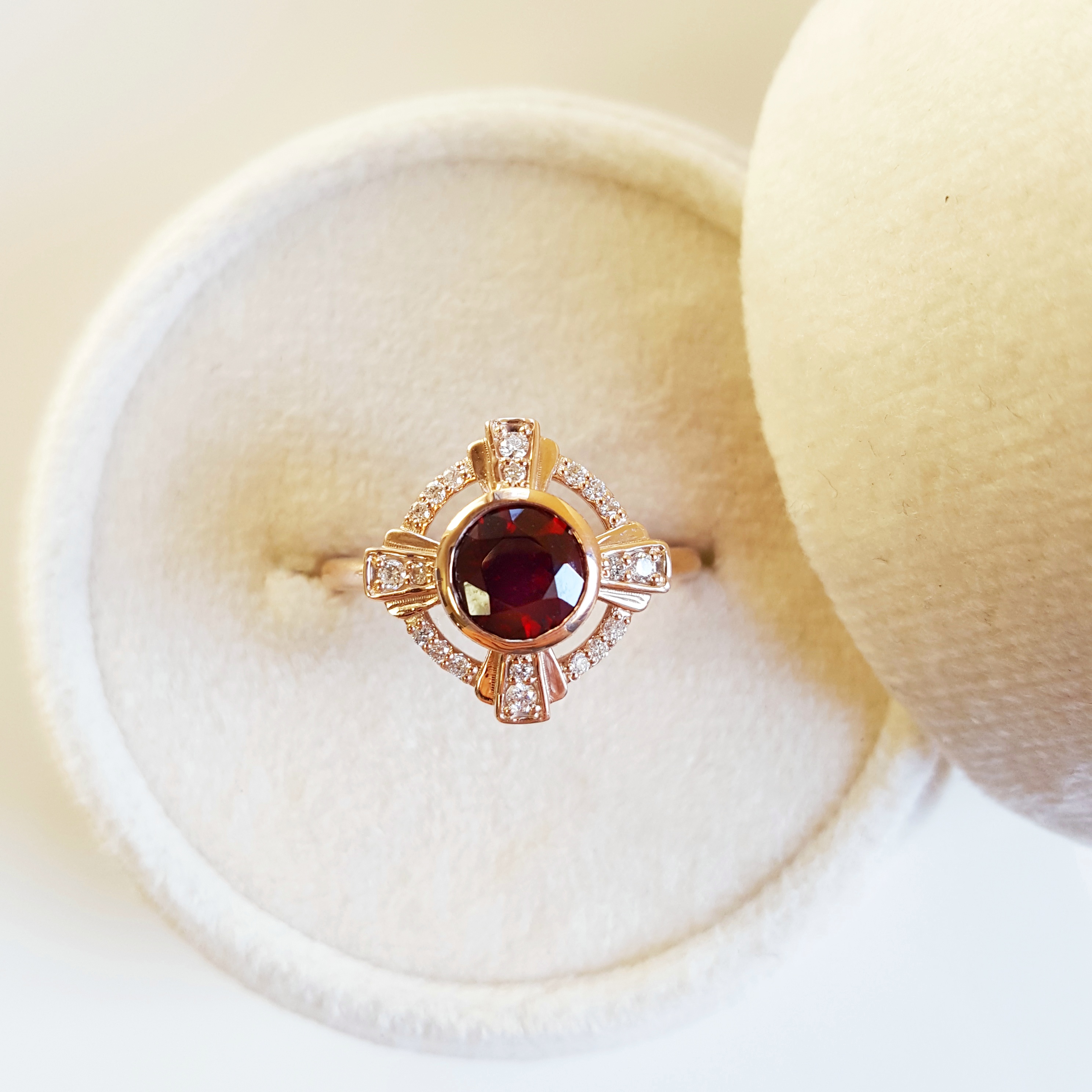 Modeled after our sold-out American Gem Collection ring, we love this more petite take on The Compass design! Adorned with sparkling diamonds and all wrapped up in 14k rose gold, this feminine-yet-modern ring beautifully showcases the garnet center. We love the subtle Art Deco inspiration in the fanfare of lines that extend out from the center, and the gorgeous use of negative space that makes the center stone appear even larger. Your style will always be headed in the right direction with the “compass” ring! 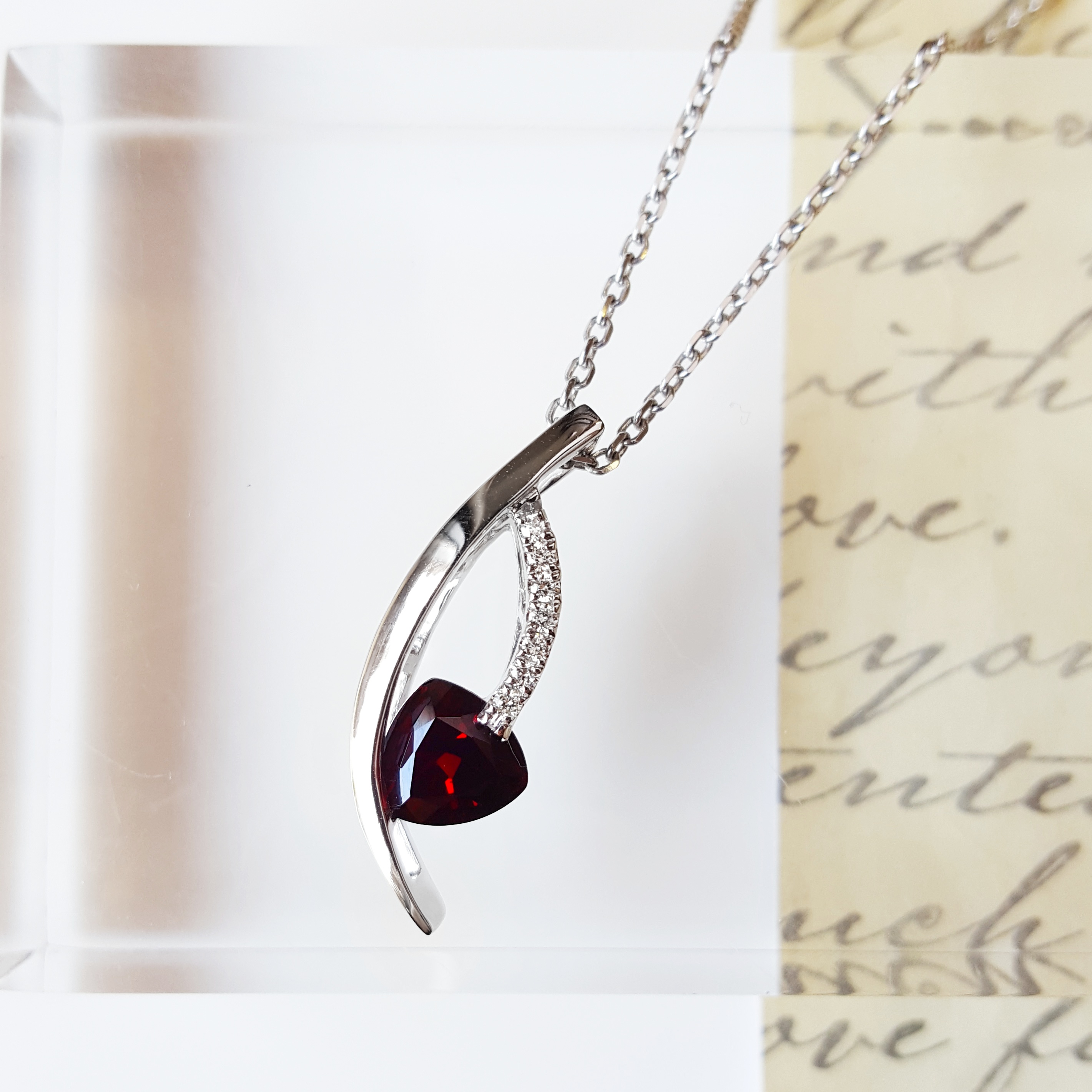 This pendant design is one of our instant classics. Crafted in 14k white gold, the bright metal creates a stunning contrast with the deep red of the Arizona Anthill Garnet. Did you know that “Anthill” garnet has that name for a good reason? In the Four Corners region of Arizona, garnet crystals form naturally underground. This just so happens to be where ants dig the tunnels that create their homes. And, as ants are want to do, when something is in their way, they just move it to the surface! So we have ants to thank for the “mining” of this gem. All us humans have to do is search the ground for telltale sparkle, and finding the garnets is a breeze! That does mean that it’s very rare to find large anthill garnets, so gemstones over 1 carat are especially treasured. 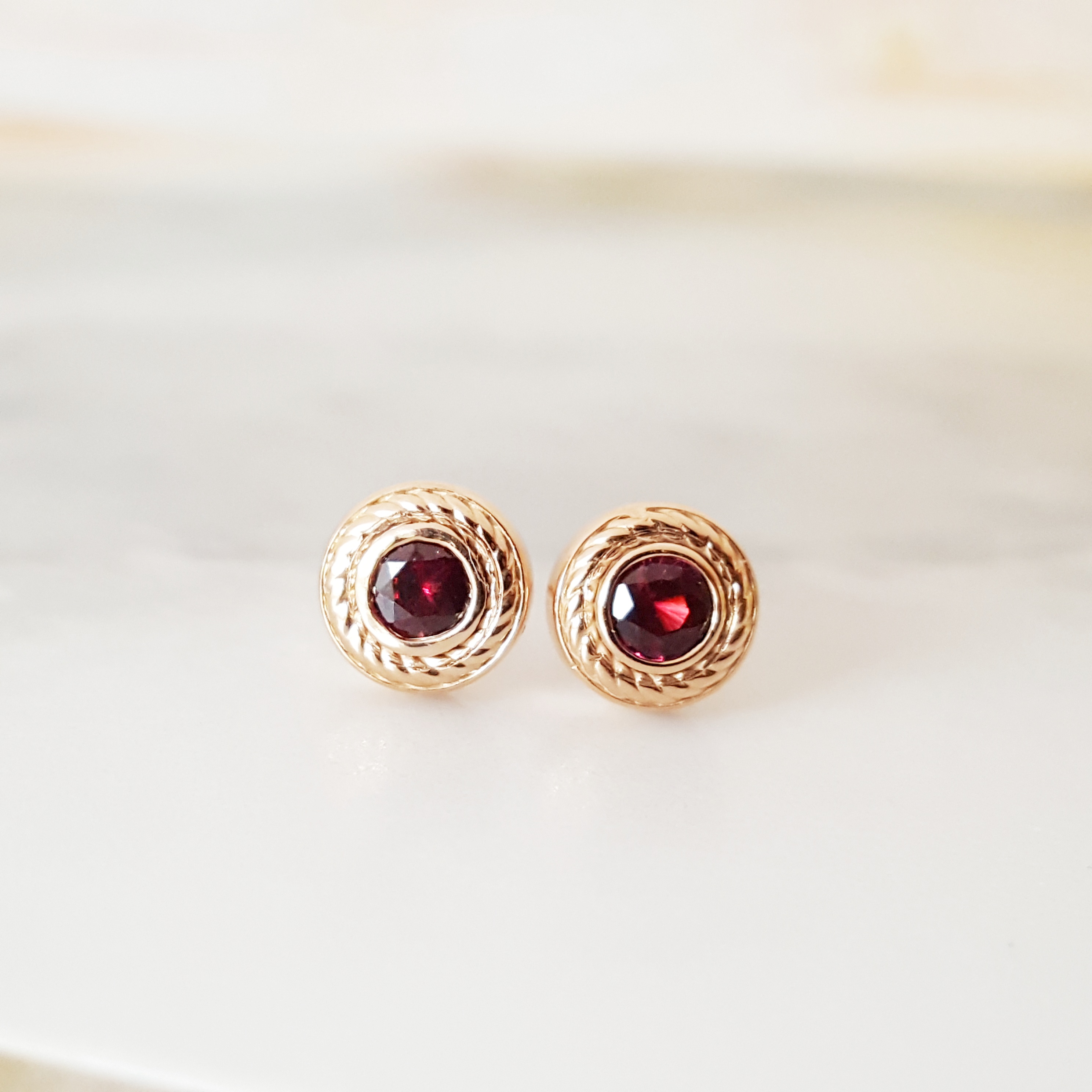 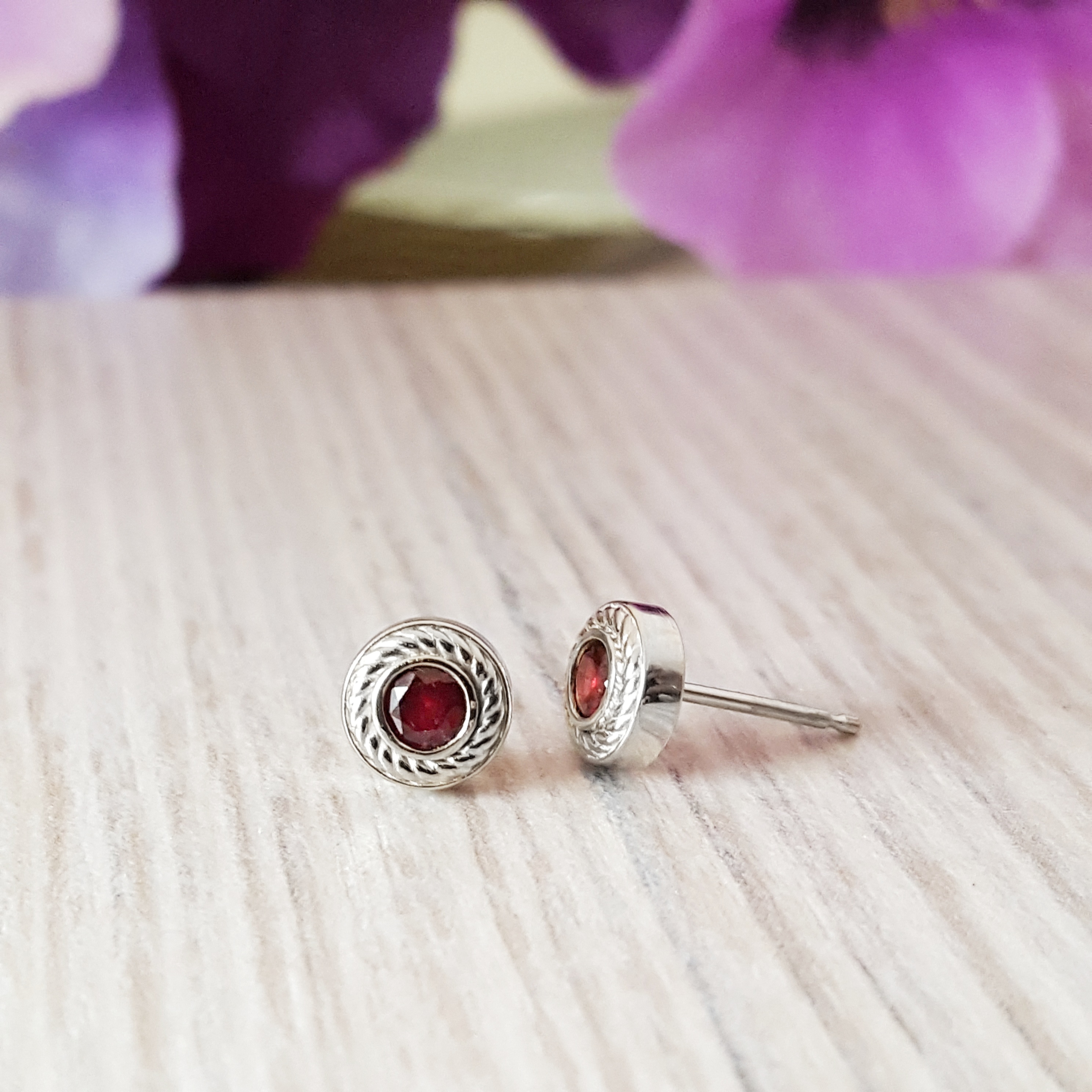 Arizona isn’t the only state that has gorgeous and dark red garnet! Nicknamed “the Gem State,” Idaho definitely lives up to its name. These earrings, made in your choice of white or rose gold, feature petite Idaho garnet gems! Idaho garnet is the same “species” of garnet that is found in Arizona - both are “pyrope” garnet, with a classic brick-red color. Idaho is also host to other kinds of garnet, including star garnet and rhodolite garnet. 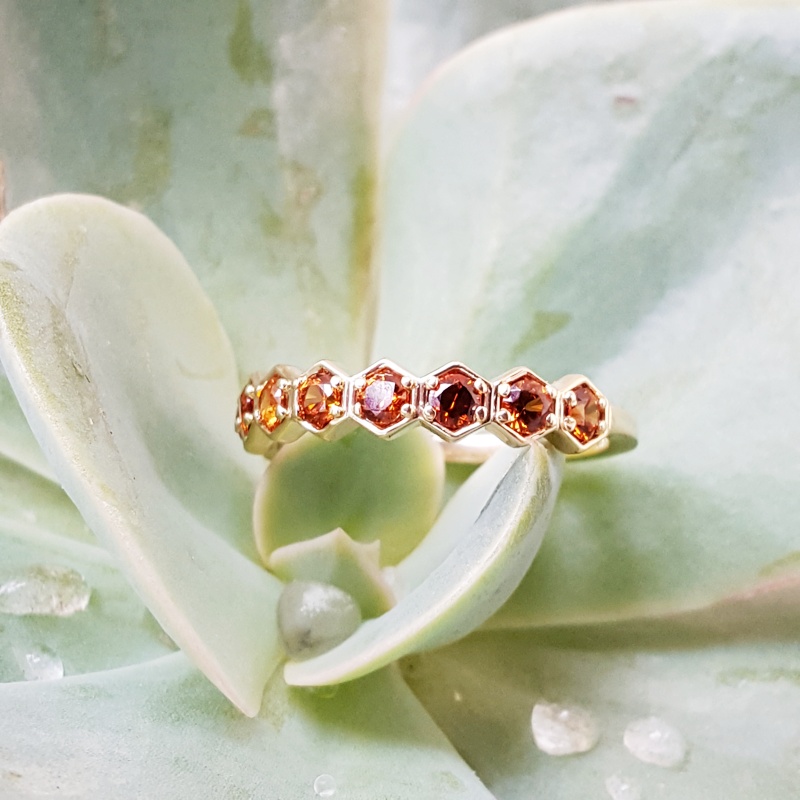 California is another state that has its fair share of gorgeous gemstones! This garnet is a different kind of color altogether - ‘spessartite” garnet is recognizable by its vibrant orange hue. Set in a hexagon stackable band style, this ring is versatile to wear with other rings or all on it’s own! The dark orange tone is complemented by warm 14k yellow gold in this design, bringing to mind the colors of the sunset. Fun fact: garnet is a gemstone that can be found in a number of different colors, including mint green! Think out of the box next time you’re looking for the January birthstone and explore the alternative colors that are out there. Sami Fine Jewelry can create a custom design and source any garnet you want! 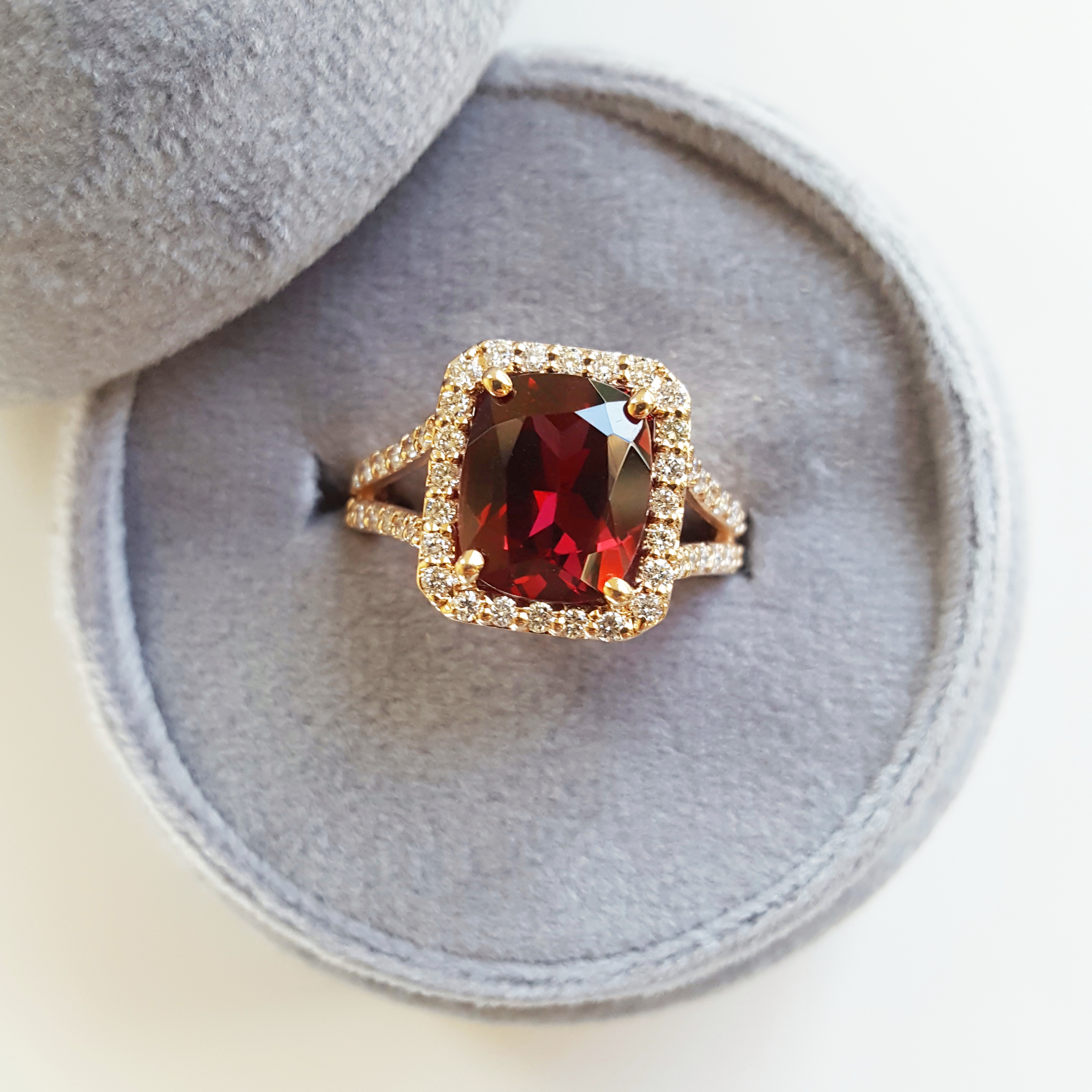 Last but certainly not least, I wanted to showcase a garnet from outside the U.S. This show stopping ring features a 4.9 carat natural garnet from Mozambique! Crafted in 14k rose gold and with 1 carat of accenting diamonds, it is easy to see why this gemstone is so sought-after all over the world. Though this gemstone is quite large, it is still beautifully bright in color, and is a perfect conversation starter. This garnet is of the “rhodolite” species - it’s closer to a raspberry or dark magenta hue than the classic brick red shade.

Now that we’ve explored some of the garnet designs that we’re loving, why not get to shopping? We have garnet necklaces, rings, earrings, and even bracelets to suit even the most difficult gift-getter. And, if you’re still not finding the perfect items, we would love to embark on a custom design adventure with you!

Shop all of our garnet designs!